The Shoe In The Mirror Theory

Today, on the 50th anniversary of his assassination, the White House managed to photograph JFK's portrait just as Barry occasioned by, entranced to such unimaginable depths of reflection that any of us would not likely find our way back should we embark upon them.


Oddly enough, it was because an opportunity here for peak-shamelessness went unexploited that I even looked twice. I thought for sure Barry would be eye-locked with his superior predecessor in existential osmosis, but he isn't. And even though I'd seen the portrait before, my mind never wondered beyond the frame what Kennedy was actually looking at. But all of a sudden here's this near-floor-to-ceiling photo-op of nothingness with which to follow his line of sight and...that's when you see it: the shoe in the mirror. 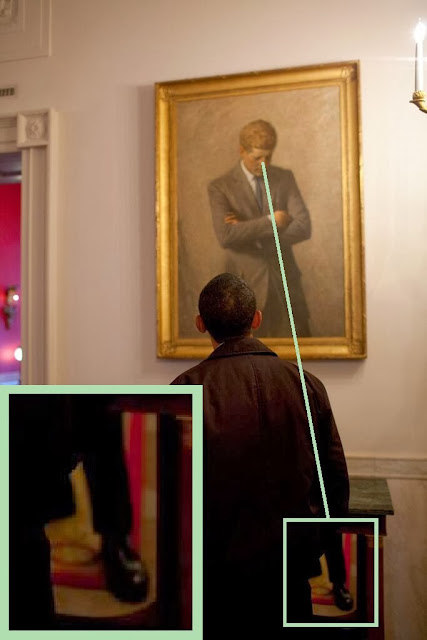 It looks like Barry's shoe or someone's (shoe) just behind him stepping over a Red line. Some kind of red sash or holiday ribbon. But notice the upward turn of the Red line; Barry would have to be holding the material taut and we can't see him doing that.

Regardless of how it was achieved, Kennedy was murdered by a Red communist coward and, if you were to strech him a bit, his leg and foot would be anatomically correct with the reflection.

And since I think Barry&Co. are spiteful cowards with bloodthirsty pedigrees I'm theorizing that this scene was meticulously staged and meant to convey, however cryptically, on this conspiracy-rich anniversary, that Kennedy crossed a line - a Red line.

UPDATE: A reader from another site has a different picture from roughly the same time as the one in question. 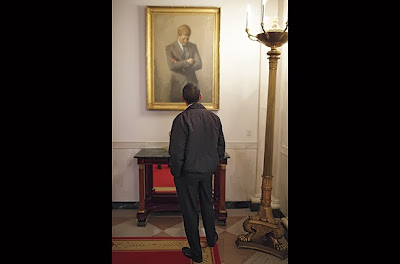 So, it's not a sash or a banner, it's a rug. A rug that Barry is standing unnaturally upon.  This makes you wonder how many photos were taken from how many angles and why the White House settled on the one they did.

He is standing in the exact position as in the original photo.  Look at his foot exceeding the corner of the rug in both pictures. A photographer snapped one of those photos, moved to a new location, and snapped the other (we don't know the order). All the while, Barry's foot remained planted in the same awkward position. And it just so happens that position aligns his reflection with a natural extension of Kennedy's body in the photograph chosen? No, I don't think so.
Posted by obamuh at 9:42 PM No comments: