Udall is Colorado Democrat Senator Mark Udall (of Obamacare infamy).  His opponent's sidekick, as Freddoso notes, could shoe a horse:


That is Randy Baumgardner, and he will be at least one of Udall's Republican challengers for U.S. Senate in 2014.  He is a rancher, former Colorado state employee, and wears the kind of stache that makes you wonder who's grooming whom.  Randy needs to round up as many votes as possible to defeat Udall and, if he implemented the following ad campaign, likely would not be worse off.

Mustaches have enjoyed a major renaissance in the last few years.  Whether Randy is an excruciating hipster or has always looked like a boss is beside the point; the mustache, love it or leave it, is relevant.

My first thought was replacing the 'm' or 'n' in Baumgardner with a mustache.  Then I thought about replacing the 'n' in Randy.  Those were not original ideas as Freddoso pointed out: 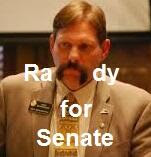 That's a great image for playful use on the web, but probably not appropriate for a statewide campaign.  Then I came up with this:

Obviously a graphics artist could make the '∩' look more like an actual mustache, but imagine that on billboards, bumperstickers, store windows, etc.  No name, no office, no other information.  People will wonder what it means, ask others if they know, and some will know damn well.  The sooner this stubbles up the better.

And the font evokes a certain hardness. The Old West.  You think about the outlaw on the poster but you also maybe get the essence of the deputy who hung the notice.  It definitely evokes firearms (to Americans and movie-goers) and that is a crucial voter base in Colorado considering their new firearm restrictions.  If a candidate isn't fighting for gun-owners and the Second Amendment in upcoming elections they will not have connected with a passionate ally.  So the font alone harmonizes well with the concerns of self-defense advocates in Colorado.

Now, once every Coloradan's awareness has been infringed by the 'WA∩TED' enigma, (let's call it 6 months before election day), the billboards and bumperstickers and store windows get an update:

But with better staches.  And 'Randy' seems like an easy word to brand.  Simple, sexy, two-syllables. 'Baumgardner' is a mouthful for casual use.

Editor's Note
Full disclosure: As of this writing, I don't know anything else about Randy Baumgardner.  I do know damn well that Colorado Democrat Senator Mark Udall voted for Obamacare and in doing so is shamed for all time.
Posted by obamuh at 2:28 AM No comments: