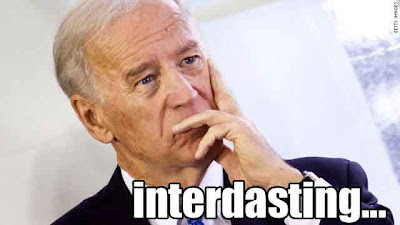 Posted by obamuh at 7:48 PM No comments:

Ben at Ace of Spaces HQ tweeted about wanting Paul Ryan and his Mom do some campaign commercials so I threw out an idea which he liked so now I'm going to riff on it. I'm open to improvements, especially the granny's subdued/distant monologue.

Open with a shot of a child's bedroom and an adult black man sleeping on his right side in a child's bed. Next shot is the back of the man's head, which reveals a massive and characteristic ear, as sheep begin to jump over his head. He coos with approval and drifts off to sleep.

A wide shot of what appears to be a man pushing Granny in a wheelchair toward the edge of a cliff. Tight shot on the back of a man's figure with a delicate, fuzzy sheep head and neck, trembling inside a broad and distinguished suit, bouncing as we hear the bouncing of the wheelchair over rocks. [Our dreamer lets out moans of approval throughout]. We now sense the void in front of DemonVeep and his passenger as they slow to a stop at the precipice.

The camera halts, and begins an orbit around DemonVeep which will reveal his face. As the orbit begins, we hear small talk from the elderly passenger about her grand-kids and their activities. Her voice is slightly distant and the orbit and music imply a sinister revelation of the head, but we hear her. "...and the kids are fine..." The orbit completes, and we stare DemonVeep in his terrible eyes. [Our dreamer is giddy with delight] "I'm just glad to know there's enough money left for them. Thanks to..."

DemonVeep shrugs a cold, comical shrug, and with it, dumps granny off the cliff.

Maybe a dummy shot where the dummy is obvious. Maybe not, those can be dumb.

Below, a jogging/bow-hunting Paul Ryan is jogging/stalking by and catches Granny heroically, then goes about his business.

[Our dreamer wakes up with a terrible cry]

If possible, it would be cool to sample Vader's infamous "NOOOOOOOOOOO!" to express the cry but any jolt of panic will do.

My initial tweet about this actually had Evil Paul Ryan with glowing red eyes pushing granny off the cliff and Good Paul Ryan catching her but I totally forgot about that once I started writing. Everything else is the same.

Ok, I departed almost entirely from my original tweet. Take out the man in the child's bed intro, the moans of approval and the laughter, and just start with the wide shot of the cliff. Evil Paul Ryan and Good Paul Ryan. Obama wakes from dream.

Seeing Paul Ryan actually catch the Granny might be off-putting and little too much pre-success-hero-worship of the brand we saw for Barry. Maybe instead, since we see Granny forcibly launched down the face, we just see her adjusting her skirt (subliminally now able to stand) and Paul Ryan is already 20 feet away, on about his business. There is no heroic catch and stupid exchange of grins, just a safe Granny and a jogging/stalking-again Paul Ryan.