Ted Turner said in an interview recently that it was "te[(rrible?) rrific?]...good that (American) troops are committing suicide (in greater numbers than die in combat)." Fuck him and his mother. 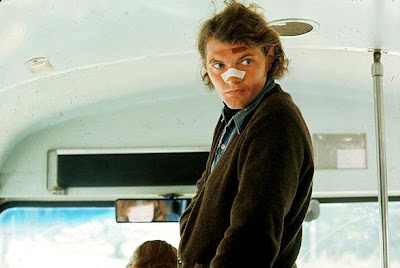 In recent years I've generally tried to live life with a tolerant, free-market state of mind and as strongly as I rejected Turner's words emotionally, I felt trapped philosophically into giving them credence. If our soldiers are so demoralized, we will recoil and disfavor decisions which might put them in that position. The market of humanity will bias toward peace. And that's good, right? Wait, that can't be right, because that would mean I agree with Ted Turner and he is lower than shit. Luckily that isn't what he said.

A school bus is loaded with children. The bus driver changed a tire the day before and left one of the lugs loose. The tire finally comes off and every inhabitant dies in a crash. Is it good that those children died so that another driver double-checks their own lugs?

But if a lesson is learned - good. After the evening news, maybe a few people will go out and kick the tires before tomorrow's commute. Check the fluids, get a tune-up. Maybe just be more thoughtful, if only for a day. THAT is good.

Is it good that people will lose their jobs, some even unwittingly as a result of their own vote (for a traitor) in an election?

But if a lesson is learned - good. Maybe they will sour on the regulation that cost them their temp work or shut down their mine. They might blame the politician and party that passed it. THAT is good.

Is it good that more soldiers are committing suicide than die in combat?

Ted Turner is an asshole.

(There will be future posts on this subject very soon and I am open for debate in the comments.)

Editor's Note: I know damn well that is not Ted Turner.
Posted by obamuh at 1:09 AM No comments: